Where’s Willow? Willow is on a frosty island of volcanic ash sand and disgracefully graceful natives. Where all that moves is infused with elegance and stillness, from ‘creeper’ waves, to blinking cliffs. And I’ll bet the cool creatures born between them easily refrain from using third person narratives to introduce travel stories – you see, the Icelandic have taste. 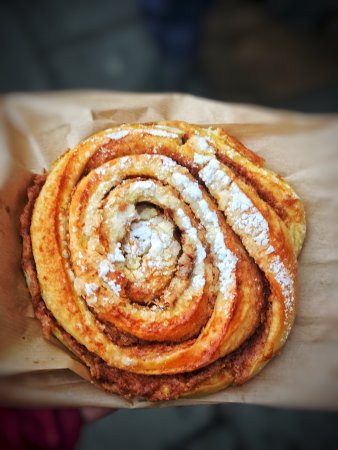 Over a packed and precious four day stint along the islands south coast, we quickly discovered how ‘tasteful’ is a term fit to describe a vast array of Icelandic enterprises. From the utilization of fossil-fuel-free geothermal energy to heat icy streets and run luxurious Hot Springs, to the sensation of traditional cinnamon buns at modern bakery Brauð & Co, there is a flavour here for every traveller. (I agree, beer is a flavour.)

But first, on a sober and mostly off-topic note to the literary traveller: Should you find yourself concerned with the compulsion to preconceive, to review, to furiously plan and drool over Lonely Planet pocket guides at the cost of having an organic experience (sweet irony), then consider indulging instead in some national literature. I figured this was an outside-of-the-box way to fantasize and explore the culture of my next destination, without creating an expectation. And let me tell you, Icelandic prose is as classy as you know you want it to be. In fact, before we set out for the island of dreams, I found myself more heavily engrossed in a sparkly, 20th century poetic fiction named ‘Heaven and Hell‘, than the entirety of Western civilization was when Daenerys finally got down and dirty with her handsome fur-clad nephew. Jón Kalman Stefánsson’s tragicomic journey is so effortlessly sexy, it slunk right between my fingertips with a GOT reference. And though visualising how ‘the ocean is cold-blue and never still, a gigantic creature that breathes‘, did not entirely chasten my typically elaborate researching antics, it afforded me a new kind of daydream.

National literature offers a cultural insight that the photograph perhaps cannot. It evokes a feeling and allows the mind to wander(lust). Fortunately enough for the neurotic reader, this wonderland is well equipped to blow you away – so expect your well informed expectations to be exceeded, should you chose to read everything about it. When devising a trip to Iceland, fantasise and romanticise to your heart’s content. Get into it. Get weird. Because regardless of the 4,259 Blue Lagoon Tripadvisor reviews you surveyed, its captivating air ‘floods into the dreams of those who sleep’, for months to follow.

“Did you visit the Blue Lagoon?”

To a select number of travellers,  The Blue Lagoon is considered a saturated topic of this exceedingly stunning destination. Let me stop you right there. Sitting at a 30 minute drive from Keflavík International Airport, the Blue Lagoon relaxation experience is precious enough for tourists of every persuasion and occasion. Imagine arriving with your lover, only to discover that his father and cousin are queuing up for a paddle beneath the stars, too? Nae problem! For a fee of just £70 (this price includes a towel and beverage of your choice), the silica, algae & mineral rich waters promise to evaporate your grievances. Einstök helps too, though individuals are capped at 3 alcoholic drinks each using an annoyingly innovative wristband system. And let’s be clear – the water is not. While this is but a minor side effect of the Lagoon’s mineral density, one can only imagine the booze cap is an attempt at curtailing the number of squeezy, grabby hands below the murky surface. Possibly drunk drowning, too, but mostly grabby hands.

Under a veil of mind-winter mystique, this 1970’s hot-spot dissolved any of the family gathering awkwardness and even afforded us the luxury of floating gallantly past a gaggle of cockney lads. And as the thermal water rose like some kind of super-sensible forcefield, the banter evaporated within a steamy circle.

Though representative of the geothermal energy rippling below the Island’s surface, however, this infamous and commercialised spa is but one of multifarious outdoor springs where hot water is harnessed for communal pleasure. Whilst three days of chasing the sun did not afford us a visit to such hideaways as the sunken stone ‘Viking Pool’ in the Hekla Lava, or the so-called ‘Farmers Pool’ set within the Rhyolite Mountains at Landmannalaugar, these may be a more favourable pick for travellers set on authenticity. In the village of Flúðir, you may even take a dip in the geothermal bath considered to be Iceland’s first. Amidst the enchanting Golden circle, Gamla Laugin, or ‘The Old Pool’ (also known as the ‘Secret Lagoon’), is said to have lay in wait for aching feet since 1891. As if we did not have enough reasons to return in the summer months.

To cut a lot more words out: though the great big Blue Lagoon may not be an alternative travellers tipple, it is time effective (right by the airport) and nevertheless magical. Fill your boots (or rather bikinis) by pre-booking, to slap your loved one in the face with a complimentary molten rock mask in this enormous, sexy natural bath, before making your way towards the great lights of Reykjavík.

All Of The Lights

The expense of a scandinavian rendezvous is no myth. So whilst the majority of us rarely venture into Duty Free to do anything but kill time and try on outrageous sunglasses, we found loading our hand luggage with a litre of Monkeys Shoulder as purposeful as packing sandwiches from WHSmith, to avoid shit airplane toasties. Having said that, we take time off work to explore, not to save money! I found myself slurring this between sips of a £18 drink at the trendy pizza and cocktail bar beneath Mikkeller & Friends – justifying that the 18th century, four story building once housing Reykjavík’s first X-Ray clinic and Icelandic Women’s Shelter was a cultural payoff. If you are unfamiliar with this effortlessly stylish Danish craft brewery, be sure to make a sip stop for delights from the likes of  To Øl.

Travel with the intention to drift. It was at the exact moment we strolled into an unassuming bar marked by little but a red cockerell with the word “Prikið” etched beneath it, letting slip tomorrows ‘early start’ itinerary, that our escapade in Reykjavik had truly began. We have since Google translated Prikið into ‘tool’ and are still none the wiser as to what this refers to. What we did learn, however, is that when you detect a balring, graffitied toilet, sticky tabled hub of Icelandic excellence, you throw your wallet on the bartop and set about blending in. To shorten a potentially long description of our elaborate-piss-up-extravaganza short: in the wee hours this dingy delight opens its doors to rap performers, cool youths and lucky tourists. Rumour has it that Prikið are also dishing out some serious scran – If you can make it back after the late sunrise. As the low swinging lights guided us out the doors at 4am, we vowed to always stray from the path.